MUFON is an International Organization that investigates UFO reports from around the globe and not just The United States. If you are in Canada, Japan, Germany, Brazil, Australia or any other country, please submit your report and an investigator will get back to you! We value your anonymity and your name will never be used without your permission! Simply click on the “Report A UFO” button to report your UFO sighting.

“The MUFON Experiencer Resource Team is a group of compassionate MUFON field investigators who specialize in abductions and non-human entity contact. If you have had an experience like this and would like to speak to an ERT member, click on the Report an abduction or non-human contact box at the top of the page. This will get you to the ERT experiencer questionnaire. Once you have completed that an ERT member will contact you.

Astronomer Frank Drake, Famous for The Drake Equation, has Died! 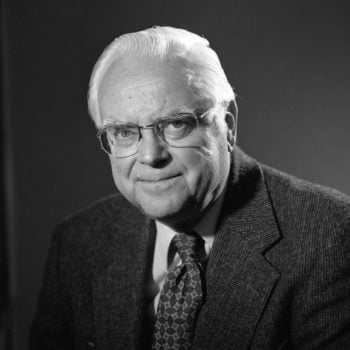 Astronomer Frank Drake, born in 1930, has died this week. Mr. Drake is most famous for his equation that mathematically tried to estimate the possible number of intelligent civilizations in our galaxy. Mr. Drake is also a founder of SETI (The Search for Extraterrestrial Intelligence).

His first experiment in the 1960s looking for ET Signals was called Project Ozma. It did not succeed in finding any intelligent signals but the branch of science to do so was formed!

Mr. Drake had a long and distinguished career with Cornell University, the University of California at Santa Cruz and the Arecibo Radio Telescope in Puerto Rico. Here is his famous equation: 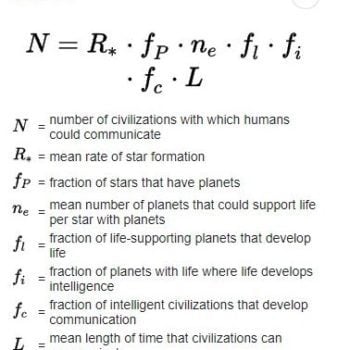 The Calvine Photo is Finally Released!

32 Years ago in a remote hilly area of Scotland in 1990, two witnesses saw and photographed a large diamond shaped object with a military plane in the lower right corner. The photo was never released by the British MOD but facsimiles have made their rounds for decades while the MOD denied the photo’s existence. Why? This week the actual photo has been released by Sheffield Hallam University and is currently making its rounds virally about the internet. It is an extraordinary photo but exactly what it shows is inconclusive. It is an impressive diamond and seems to dwarf the plane in the photograph. The question to ask is why release the photo now after 32 years of silence? Is it military? Is it Extraterrestrial? Is it real? 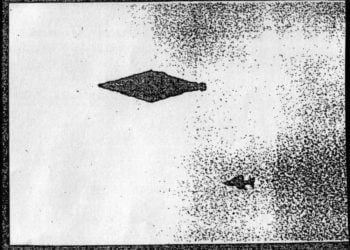 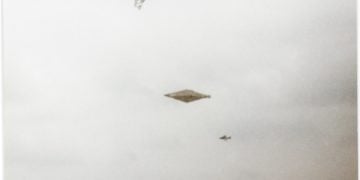 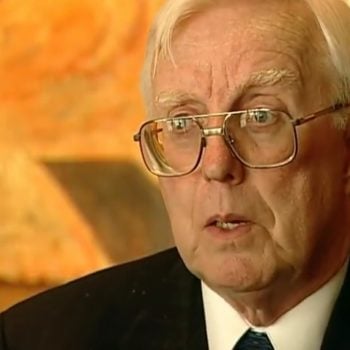 Back in the days when M.U.F.O.N. stood for Midwest UFO Network, John Schuessler was there. In 1969, along with Walt Andrus, John, an aerospace engineer with an interest in Unidentified Flying Objects, formed what is now the biggest and best UFO Organization in the world – The Mutual UFO Network!

Last week, Mr. Schuessler, our International Director Emeritus, called it a day and asked Dave MacDonald, our Executive Director, to remove him from our active roles after 53 years of dedicated service using the scientific method to unravel the UFO mystery.
John has written innumerable scientifically based articles for the MUFON Journal and other publications for decades. One of his many famous cases is The Cash-Landrum Affair in December of 1980 when two women and a boy in a car spied a diamond shaped object being trailed by military helicopters. The women suffered radiation sickness afterwards and even sued the United States Government unsuccessfully. 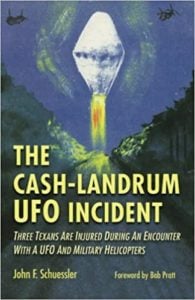 In our MUFON Anomaly Research and Reporting System (MARRS) database of old paper reports submitted to MUFON before the implementation of our modern computerized Case Management System (CMS), I found that John had over 77 pages of documentation on this famous case. Not only that, the record shows that John even visited the witnesses in the hospital to see how they were faring! Compassion and scientific inquiry at their finest!
John even co-authored a book with a foreword by famous UFOlogist Bob Pratt entitled “The Cash-Landrum UFO Incident” which is still available on Amazon.com.
Some of our readers may recall that John appeared in several TV programs and is listed in the IMDB.COM database. According to IMDB, “John F. Schuessler is known for Unsolved Mysteries (1987), Dan Aykroyd Unplugged on UFOs (2005) and Enquête sur les OVNIs (2004).
To say good-bye to a legend is always tough especially when it is one of our founders! We are moving into a new generation at MUFON with new leaders, new ideas and an era that may soon see disclosure. We never would have arrived where we are today without scientists like John. We will miss him! But we must continue the journey until we have an answer! Thank you, John! And Godspeed!
Join Now

About That MARS Ball of Twine! 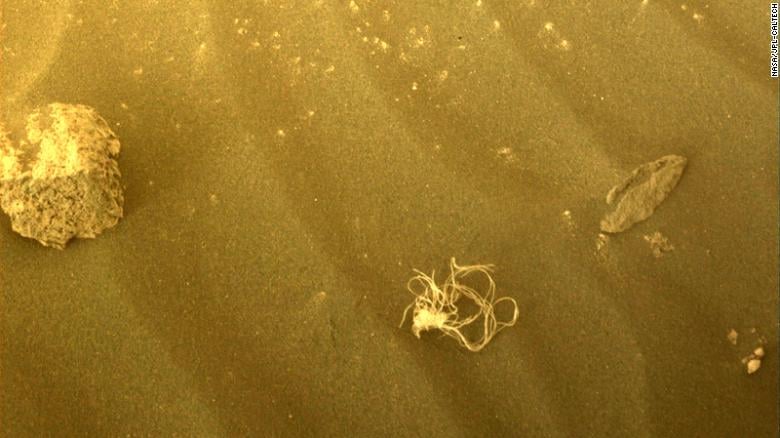 NASA came under the spotlight this week when their Perseverance Rover, while pounding the sands of Mars, photographed what appeared to be a ball of string in its path. Some accounts called it a spaghetti like substance. It looked a bit like tumbleweed too!

So what was it? News media outlets like CNN endorsed NASA’s “most likely” explanation that it was string left over from the Rover’s landing vehicle.

Just to refresh your memory, several weeks ago, the Perseverance Rover snapped a photo of what appeared to be a piece of aluminum foil lodged between two rocks. NASA, at that time, told the world it was most likely material from the  Rover’s landing craft. It sounded plausible at the time.

However, UFOlogists and probably the majority of the news watching public think it is a slight stretch that a multi-billion dollar (2.7 billion to be exact) space craft would be using Home Depot twine in its landing craft. That’s a stretch.

Just for reference, does the reader recall how meticulously the James Webb Telescope was inspected for defects and purged of any Earthly contaminants before being launched into space? Double that effort for the Mars Rover, right?! How then could an operation as sophisticated as NASA accidentally let loose a bundle of string on the red planet especially such a short time after letting aluminum foil from the same craft contaminate the Martian surface? NASA is surely leaving a lot of garbage on the surface of Mars for an agency that does not seek to contaminate other worlds!

A ball of Earthly twine from a multi-billion dollar highly sophisticated spacecraft accidently released on another planet? I don’t know. Does NASA use 19th century twine in a 21st century inter-planetary spacecraft? If so, how do they use it? Inquiring minds want to know!

Perhaps they are also using Elmer’s Glue and popsicles sticks too!~

The Symposium is Over for Another Year! 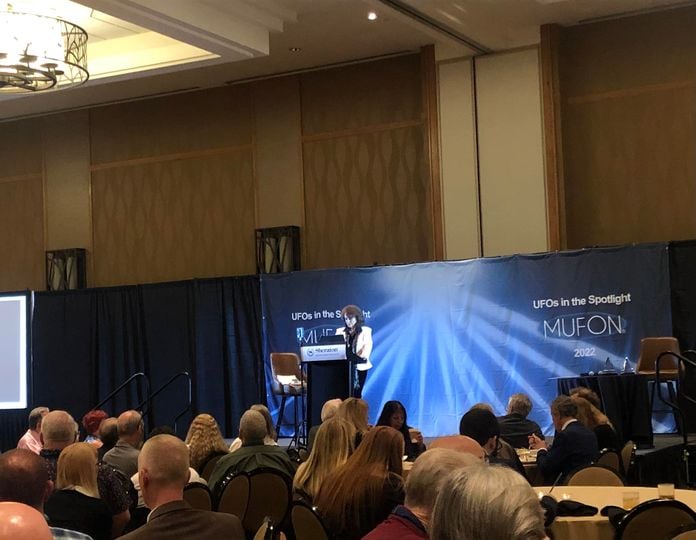 Another year and another MUFON Symposium is in the books!  Denver was a great success! From our banquet, to our speakers, to our Experiencer workshops and even an upcoming movie preview with U.S. Representative Tim Burchett who represents the 2nd congressional district of Tennessee  joining us there!

A giant thank you goes out to all involved!

Pictured above is former CNN anchor and this year’s keynote speaker Cheryll Jones.

Radio show host Dave Scott was speaking on how the U.S. Government and the Media have suddenly changed tunes about coming clean about UFOs.  He stated that” While it is important that government and media now take the subject seriously, the real question no one is asking is ‘Why Now?’

Finally, Thom Reed, the 10 year old boy in 1969, abducted with his family in Massachusetts said” MUFON is a wonderful organization that never gets the credit they deserve! If it weren’t for MUFON, the world would never know my story!”

MUFON® is an all-volunteer, non-profit 501(c)3 charitable corporation and the world’s oldest and largest civilian UFO investigation & research organization. Our goal is to be the inquisitive minds’ refuge seeking answers to that most ancient question, “Are we alone in the universe?” The answer very simply, is NO. Whether you have UFO reports to share, armchair UFO investigator aspirations, or want to train and join our investigation team, MUFON is here for you. Won’t you please join us in our quest to discover the truth?