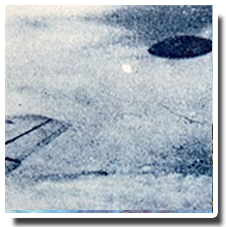 The Mantell UFO incident was among the most publicized early UFO reports. The incident resulted in the crash and death of 25-year-old Kentucky Air National Guard pilot, Captain Thomas F. Mantell, on 7 January 1948, while in pursuit of a UFO.

Historian David Michael Jacobs argues the Mantell case marked a sharp shift in both public and governmental perceptions of UFOs. Previously, mass media often treated UFO reports with a whimsical or glib attitude reserved for silly season news. Following Mantell’s death, however, Jacobs notes “the fact that a person had died in an encounter with an alleged flying saucer dramatically increased public concern about the phenomenon. Now a dramatic new prospect entered thought about UFOs: they might be not only extraterrestrial but potentially hostile as well.”

OVERVIEW
Mantell was an experienced pilot; his flight history consisted of 2,167 hours in the air, and he had been honored for his part in the Battle of Normandy during World War II.

On 7 January 1948, Godman Field at Fort Knox, Kentucky received a report from the Kentucky Highway Patrol of an unusual aerial object near Maysville, Kentucky. Reports of a westbound circular object, 250 feet (76 m) to 300 feet (91 m) in diameter, were received from Owensboro, Kentucky, and Irvington, Kentucky.

At about 1:45 p.m., Sgt Quinton Blackwell saw an object from his position in the control tower at Fort Knox. Two other witnesses in the tower also reported a white object in the distance. Base commander Colonel Guy Hix reported an object he described as “very white,” and “about one fourth the size of the full moon … Through binoculars it appeared to have a red border at the bottom … It remained stationary, seemingly, for one and a half hours.” Observers at Clinton County Army Air Field in Ohio described the object “as having the appearance of a flaming red cone trailing a gaseous green mist” and observed the object for around 35 minutes. Another observer at Lockbourne Army Air Field in Ohio noted, “Just before leaving it came to very near the ground, staying down for about ten seconds, then climbed at a very fast rate back to its original altitude, 10,000 feet, leveling off and disappearing into the overcast heading 120 degrees. Its speed was greater than 500 mph in level flight.”

Four P-51 Mustangs of C Flight, 165th Fighter Squadron Kentucky Air National Guard already in the air—one piloted by Mantell—were told to approach the object. Blackwell was in radio communication with the pilots throughout the event.

One pilot’s Mustang was low on fuel, and he quickly abandoned his efforts. Air Force Captain Edward J. Ruppelt (the first head of Project Blue Book) notes that there was some disagreement amongst the air traffic controllers as to Mantell’s words as he communicated with the tower: some sources reported that Mantell had described an object “[which] looks metallic and of tremendous size,” but, according to Ruppelt in The Report on Unidentified Flying Objects, others disputed whether or not Mantell actually said this.

The other two pilots accompanied Mantell in steep pursuit of the object. They later reported they saw an object, but described it as so small and indistinct they could not identify it. Mantell ignored suggestions that the pilots should level their altitude and try to more clearly see the object.

Only one of Mantell’s companions, Lt. Albert Clemmons, had an oxygen mask, and his oxygen was in low supply. Clemmons and a Lt. Hammond called off their pursuit at 22,500 feet (6,900 m). Mantell continued to climb, however. According to the Air Force, once Mantell passed 25,000 feet (7,600 m) he supposedly blacked out from the lack of oxygen (hypoxia), and his plane began spiraling back towards the ground. A witness later reported Mantell’s Mustang in a circling descent. His plane crashed at a farm south of Franklin, Kentucky, on the Tennessee-Kentucky state line.

Firemen later pulled Mantell’s body from the Mustang’s wreckage. His wristwatch had stopped at 3:18 p.m., the time of his crash. Meanwhile, by 3:50 p.m. the UFO was no longer visible to observers at Godman Field. The Mantell Incident was reported by newspapers around the nation, and received significant news media attention. A number of sensational rumors were also circulated about Mantell’s crash. Among the rumors were claims that Mantell’s fighter had been shot down by the UFO he was chasing, and that the Air Force covered up evidence proving this. Another rumor stated that Mantell’s body was found riddled with strange holes. However, no evidence has ever surfaced to substantiate any of these claims. In 1956, Ruppelt wrote that the Mantell Crash was one of three “classic” UFO cases in 1948 that would help to define the UFO phenomenon in the public mind, and would help to convince Air Force intelligence specialists that UFOs were a “real”, physical phenomenon (Ruppelt 30). The other two sightings were the Gorman Dogfight and the Chiles-Whitted UFO Encounter.