The alleged alien body is reportedly buried in an unmarked grave at the local cemetery.

THE INCIDENT (AS REPORTED)

The hoax theory is primarily based on historical research performed by Barbara Brammer, a former mayor of Aurora. Her research (featured as part of the UFO Files episode on the incident) revealed that, in the months prior to the alleged crash, Aurora had been beset by a series of tragic incidents:

Essentially, Aurora (which claimed nearly 3,000 residents at the time) was in serious danger of dying out; Brammer’s research also showed that Haydon was known in the town to be a bit of a jokester, and her conclusion is that Haydon’s article was a last-ditch attempt to keep Aurora alive.

The theory was further supported by the fact that Haydon never performed any sort of follow-up on the story, not even to report on the alien’s burial, which is highly unusual given the significance of the event.

Further, in 1979, Time magazine interviewed Etta Pegues who claimed that Haydon had fabricated the entire story, stating that Haydon “wrote it as a joke and to bring interest to Aurora. The railroad bypassed us, and the town was dying.” Pegues further claimed that Judge Proctor never operated a windmill on his property, a statement later refuted as part of the UFO Hunters episode. 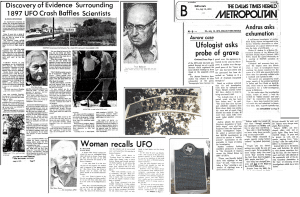 The incident has been investigated on numerous occasions. One was broadcast by local television station KDFW FOX 4 and two were aired on cable television,.

KDFW Report
In 1998, Dallas-based TV station KDFW aired a lengthy report about the Aurora incident. Reporter Richard Ray interviewed former Fort Worth Star Telegram reporter Jim Marrs and other locals, who said something crashed in Aurora. However, Ray’s report was unable to find conclusive evidence of extraterrestrial life or technology. Ray reported that the State of Texas erected a historical plaque in town that outlines the tale and labels it “legend.”

MUFON uncovered two new eyewitnesses to the crash. Mary Evans, who was 15 at the time, told of how her parents went to the crash site (they forbade her from going) and the discovery of the alien body. Charlie Stephens, who was age 10, told how he saw the airship trailing smoke as it headed north toward Aurora. He wanted to see what happened, but his father made him finish his chores; later, he told how his father went to town the next day and saw wreckage from the crash.

MUFON then investigated the Aurora Cemetery, and uncovered a grave marker that appeared to show a flying saucer of some sort, as well as readings from its metal detector. MUFON asked for permission to exhume the site, but the cemetery association declined permission. After the MUFON investigation, the marker mysteriously disappeared from the cemetery and a three-inch pipe was placed into the ground; MUFON’s metal detector no longer picked up metal readings from the grave, thus it was presumed that the metal was removed from the grave.

MUFON’s report eventually stated that the evidence was inconclusive, but did not rule out the possibility of a hoax. The episode featured an interview with Mayor Brammer who discussed the town’s tragic history.

The documentary featured one notable change from the UFO Files story – Tim Oates, nephew of Brawley Oates and the now-owner of the property with the sealed well where the UFO wreckage was purportedly buried, allowed the investigators to unseal the well, in order to examine it for possible debris. Water was taken from the well which tested normal except for large amounts of aluminum present; the well had no significant contents. It was stated in the episode that any large pieces of metal had been removed from the well by a past owner of the property. Further, the remains of a windmill base were found near the well site, which refuted Ms. Pegues’ statements (from the 1979 Time magazine article) that Judge Proctor never had a windmill on his property.

In addition, the Aurora Cemetery was again examined. Although the cemetery association still did not permit exhumation, using ground-penetrating radar and photos from prior visits, an unmarked grave was found in the area near other 1890s graves. However, the condition of the grave was badly deteriorated, and the radar could not conclusively prove what type of remains existed.

THE SYMPOSIUM IS ON!