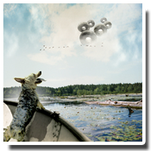 The 1947 Maury Island incident is one of the lesser-known Washington State UFO occurrences, but it should be better known for several reasons. It is probably the first incident where a witness claimed that a “man in black” intimidated him into silence, and it took place before the famed Roswell Crash, yet there were many similarities between the two. Moreover, the two military intelligence officers investigating the sighting died in a tragic air crash before they could complete their investigation. Unfortunately, the two principal witnesses, Harold Dahl and Fred Crisman, became objects of suspicion and controversy as the investigation continued.
THE INCIDENT (AS REPORTED) 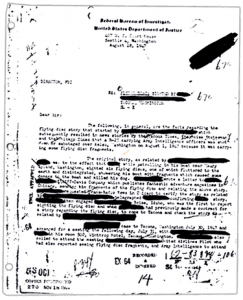 In 1947, a common hazard in the waters of Puget Sound was the logs that floated on its surface. They escaped from “jams” waiting to be turned into lumber at nearby mills on the shore.

Several men worked as an informal harbor patrol, snagging these logs and taking them to the mills for a salvage fee. Harold Dahl worked on one of these boats, and his supervisor on shore was Fred Crisman.

Dahl reported that on June 21, he was on his patrol boat with two men, his son, and their dog. Around two in the afternoon, Dahl’s boat approached the east shore of Maury Island. Maury Island is now attached to Vashon Island by a causeway road, and is about six miles west of Des Moines, Washington.

Dahl looked in the sky and saw six objects floating about two thousand feet above his ship. The objects were made of some reflective metal, doughnut shaped, and about one hundred feet in diameter. The center holes were about twenty-five feet in diameter. Dahl said he also saw round portholes and what he thought was an observation window. Five of the craft circled over the sixth, which dropped slowly. It stopped and hovered about five hundred feet above the water.

Dahl put to shore because he was afraid the center aircraft was going to crash into his boat. Once ashore, Dahl took several pictures with his camera. The lower ship stayed in position for about five minutes, with the others still circling above. One of the ships left the formation and moved down, touching the lower ships. The two kept contact for several minutes, until Dahl said he heard a thud. Suddenly, thousands of pieces of what he thought were newspapers dropped from the inside of the center ship.

Most of the debris landed in the bay, though some hit the beach. Dahl recovered a few pieces, finding it was a white, lightweight metal. Along with the white metal, the ship dropped about twenty tons of a dark metal, which he said looked like lava rock. When the lava rock hit the water, it was so hot that steam erupted. They took cover after several pieces landed on his boat.. Some debris hit his son on the arm, burning him, and another piece killed his dog.
PictureFBI Case File
After the rain of metal, the craft rose into the air and headed west out to sea together. Dahl went to his boat and tried to radio for help, but it did not work. They sailed back toward their dock, dropping the dog over the side as a burial at sea. Dahl took his son to the hospital for treatment and then told his boss, Fred Crisman, what had happened.

Dahl gave Crisman the camera, and when the prints were developed, they showed the strange air ships. However, the negatives had spots on them, which he compared to film damaged by exposure to radiation. Crisman said he did not believe Dahl’s story, but nevertheless, he went back to Maury Island, where he gathered some rock samples. He said that while he was gathering the rocks, one of the airships appeared overhead, as if it was watching him.

Dahl told investigators that the next morning, a man wearing a black suit visited him,and suggested they go to breakfast together. Dahl drove his own car, following the stranger’s new black Buick to a restaurant. While they ate, the stranger asked no questions; instead he gave a detailed account of what had happened to Dahl the day before. The man in black warned Dahl that bad things would happen to Dahl and his family if he told anyone about the incident.

Dahl and Crisman sent a package to publisher Ray Palmer in Chicago. (A year or two later, Palmer founded Fate magazine.) The package contained a box of metal fragments and statements about the strange happenings on the 21st and 22nd of July. A few weeks later, Palmer contacted Kenneth Arnold (see Flying Saucers at Mount Rainier), who had begun investigating UFOs.

Arnold arrived in Tacoma in late July with airline pilot E.J. Smith. The two of them met with Dahl and Crisman, examined Dahl’s boat, and conducted interviews. Dahl and Crisman did not produce the pictures, however. Dahl also told Arnold that his son had disappeared. (Dahl said later that his son was found waiting tables in Montana, but he could not remember how he got there.) On the afternoon of July 31, Captain Lee Davidson and First Lieutenant Frank Brown of the U.S. Army Air Force flew up to Tacoma from Hamilton Field, California.

In addition to being pilots, the two men were intelligence specialists. They met with Arnold, Smith, and Crisman for several hours. One of the officers said that he thought there might have been “something” to the story, but they had to leave around midnight. They were in a hurry to be at Hamilton Field on August 1, the day when the Air Force was to split from the Army. The two officers flew out of McChord Air Field around two o’clock in the morning on a B-25 bomber, with a crew of two other men. About twenty minutes later, the airplane crashed near Centralia, Washington. The two enlisted men managed to parachute to safety, but Davidson and Brown were killed, making them the Air Force’s first casualties.

Dahl and Crisman said that the AF officers took some of the strange metal onboard. People thought they heard anti-aircraft guns shoot the plane down. The local newspapers and FBI received phone calls stating that the plane was shot down to cover up the information Brown and Davidson had found. Because of the loss of life, the Air Force broadened its investigation and the FBI launched their own.

The Air Force investigators determined that the crash had been a terrible accident. One of the engines caught fire and the men to began bailing out. Before Brown and Davidson could jump out, a wing broke and struck the tail section, which also broke off. The plane went into a spin, trapping the men inside.

Another Air Force investigator spoke with Dahl and Crisman and visited their boat. He stated that the damage he saw did not match the damage the two sailors described. There were no piles of metal on Maury Island, and the existing samples looked like slag from a metal smelter. His conclusion matched that of the FBI investigator: that Dahl and Crisman had faked the incident to gain publicity for a magazine article.

The FBI warned Dahl and Crisman that their hoax had not succeeded and that if they dropped the matter, the government would not prosecute the two men for the fraud, which had resulted in the deaths of the two officers.

At first Dahl and Crisman went along. They made statements that the story was a fake and simply refused to give interviews on the matter. But a few years later in the January 1950 issue of Fate magazine, Crisman stated that the incident had happened, and Kenneth Arnold included Maury Island in his 1952 book The Coming of the Saucers.

Today, most people believe that Crisman and Dahl faked the incident, perpetuating a hoax that got out of control. Other people believe that the U.S. Government was behind a conspiracy that may have involved anything from UFOs to dumping nuclear waste in Puget Sound. They believe a shadow government agency sabotaged the B-25 bomber in order to eliminate the investigators and blame Dahl and Crisman.

Some investigators recently visited the crash site, hoping to find some of the strange rocks to prove things one way or another, but so far, no answers have been found.
This story is from the website Weird U.S. Read the original at weirdus.com.