July 8-10 2022
Denver CO
Save the Date!
Read more
The Official MUFON Podcast
The Mutual UFO Network - a global, scientific organization dedicated to the study of UFOs for the benefit of humanity. Guests and commentary on all facets of the UFO phenomenon from leading researchers.
Listen Now

File a report if you observe any of the Identified Events: UFO Sighting, Abduction, Entity Seen 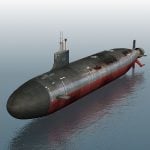 October 9, 2021 – In the middle of rising tensions between the United States and its allies with China over their growing desire to repatriate Taiwan which the United States and others have vowed to protect from Chinese aggression, the U.S.S. Connecticut (pictured above) was struck by an underwater object of unknown nature in the South China Sea on October 8th.

This incident is of particular relevance to MUFON as the South China Sea has long been associated with phenomena that could be construed as UFO or USO related. Newspaper reports as early as the nineteenth century describe orb like objects interacting with ships. During the Vietnam War, American sailors frequently described incidents in the South China Seas. In one particular MUFON case a sailor described seeing a massive egg-shaped object rise out of the sea. It was as big as “a football stadium” and had “rows of green and red lights around its equator.”

The U.S.S. Connecticut, a nuclear powered submarine, was on normal patrol. Eleven sailors were injured but none seriously although one report listed their injuries as “moderate.”  The sub’s nuclear reactor was not damaged and the vessel was returning to Guam for repairs.

The Chinese Government is requesting that the United States provide details of the incident which happened in International Waters. The Associated Press reported unnamed officials verified the submarine did not strike another submarine. This, however, adds to the mystery!

Alexander Neill is a Singapore based defense security expert. When interviewed by the BBC, he stated” the submarine probably hit something big and was going pretty fast.” It is unclear if Mr. Neill was referring to the sub or the object going pretty fast.

A United States spokesman said it was possible the sub struck a sunken vessel or “other unknown sunken object.”

While not as popular with the public as Unidentified Flying Objects (UFOs) are, the USO or Unidentified Submerged Object occupies its own unique place in the history of unknown encounters between humans and the unknown.

It is more than likely a mundane explanation will be discovered in this case, but until then, we wait!

The Intelligence Authorization Act reported here earlier in the year requires certain US intelligence agencies and the Defense Department to...

MUFON® is an all-volunteer, non-profit 501(c)3 charitable corporation and the world’s oldest and largest civilian UFO investigation & research organization. Our goal is to be the inquisitive minds’ refuge seeking answers to that most ancient question, “Are we alone in the universe?” The answer very simply, is NO. Whether you have UFO reports to share, armchair UFO investigator aspirations, or want to train and join our investigation team, MUFON is here for you. Won’t you please join us in our quest to discover the truth?
No Result
View All Result