As if the past two years have not been rich enough for UFO enthusiasts, new documents obtained through the Freedom of Information Act, reveal that UFOs regularly injure witnesses possibly due to the witness coming in contact with the UFO’s possible advanced propulsion system. There is no evidence witnesses are injured on purpose but those injuries include radiation sickness, skin burns and even brain damage.

More disturbing is that the report details pregnancies by female witnesses after encountering a UFO.

Last week, MUFON’s Executive Director David MacDonald spent several days in Washington D.C. conferring with Senators and Congresspersons about the phenomenon and how The Mutual UFO Network can use its extraordinary assets to assist the United States Government in their pursuit of answers to this most profound and perplexing phenomenon that surely had national and worldwide implications.

The report relied heavily on MUFON Case reports from our own Case Management System that is a vast repository of witness reports replete in many cases with videos, photographs and drawings as well as some extraordinary narratives.

The photograph here depicts injuries sustained by Stan Michalak in his 1967 Falcon Lake Encounter in Canada. 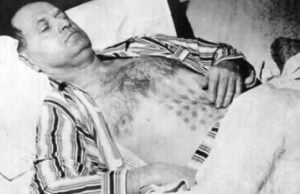