On the evening of January 31st, 2022, MUFON began receiving reports of a strange swirling vortex with a brilliant white center in the skies over Oklahoma. In all, six reports came in between 6:45 P.M. and 7:30 P.M. Central Daylight Time (CDT) from Choctaw, Tulsa, Purcell, Salina, Edmond and Gunthrie. Several of the reports contained video and photographic backup. Initial indications suggested we were dealing with a UFO flap.

Mindy Taulfest, MUFON’s Oklahoma State Director and Michael Dickerson, her Chief Investigator were on the case almost immediately and quickly closed all six cases out as an Identified Flying Object (IFO).

Additional cases began coming in from Missouri, Tennessee, Arkansas and Florida. Field Investigators G. Kurt Veale in Tennessee and State Director Margie Kay in Missouri also closed out their cases as an IFO. The remaining midwestern cases were still in progress as of this writing.

So, what was this mysterious spectacle in the midwestern skies on Monday Night? 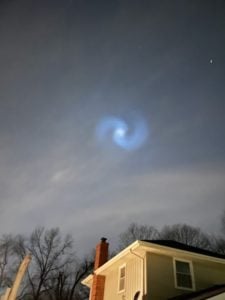 Without doubt, it was the second stage of a Falcon 9 rocket launched from Cape Canaveral at 6:11 P.M. Eastern Standard Time (EST) whose mission was to place in orbit an Italian satellite that will track maritime shipping, natural disasters and climate change. While the lower stage of a Falcon 9 is reusable and returns to Earth in a controlled landing, stage two, in this case, circled the planet not quite one revolution and released its unused fuel before re-entering the atmosphere and burning up. The vortex was the stream of fuel released by the tumbling rocket. The bright center was the reflection of the sun’s light on it from its height in space.

However, the story doesn’t end there!

A case in Melbourne, Florida (# 120656) occurred at approximately 6:13 P.M. Eastern Time only two minutes after launch where the witness filmed an object with no contrail approach the ascending Falcon 9 from above and seemed to overtake it speed wise. Distance of the unknown object from the camera and from the rocket makes it almost impossible to determine its speed and if it was only an illusion of it overtaking the rocket.

Tom Wertman, Ohio State Director, an aviation expert, used the video meta-data and Google Earth to ascertain (down to the flagpole in the video) that the witness was facing north and a possible resolution to the Tic Tac might be that the rocket, when ascending, may have crossed paths with commercial aircraft flying the North South Route to Miami! 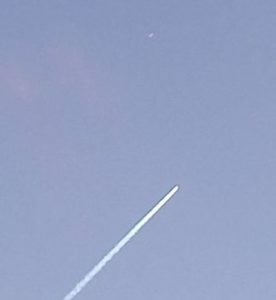 However, (yes again), the story doesn’t end there either!

Another witness in Fort Lauderdale, Florida (Case # 120625) was also video filming the launch at approximately 6:14 P.M. and filmed something equally unusual. After stage one separated from stage two and began returning to a controlled landing, stage two seemed to release two additional objects that flew in tandem until lost to the camera. The witnesses are heard stating in the video that thewy see the two objects with their naked eye. Additionally, the two objects disappear and reappear after going behind clouds. Reflections do not do this! Thus, we have ascertained these two white lights in tandem are actual physical manifestations emanating from the Falcon 9 and not an illusion! 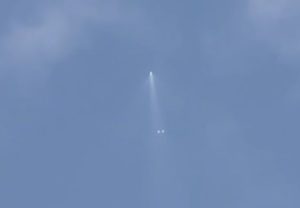 At this point, MUFON has its work cut out for it trying to ascertain a logical answer for these two seemingly anomalous objects which present as far more interesting than the vortex with an obvious explanation about an hour later. Stay tuned!