by MUFON STAFF
in blackholes
0

Notice: Trying to get property 'child' of non-object in /home2/mufonc1/public_html/wp-content/themes/jnews/class/ContentTag.php on line 45

By Elizabeth Howell on March 8th, 2013 on UniverseToday 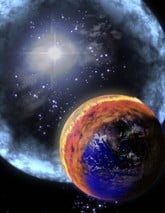 Earth. It seems so solid and permanent. But really, all you need to do is expand the Sun enough, and the entire planet would melt away. Or worse, find yourself at the mercy of some seriously powerful and angry aliens.Actually, the beings who destroy Earth in The Hitchhiker’s Guide to the Galaxy, which first aired on BBC Radio 4 on this day (March 8) in 1978, were not so much angry as logical about their reasons.

In the novel, Earthlings are shocked when extraterrestrial beings — known as the Vogons — arrive with plans to build a hyperspatial express route that runs through Earth’s orbit. The plans for the route were apparently lodged in Alpha Centauri (a star system four light-years away) for the past 50 Earth years, leaving residents of the planet “plenty of time to lodge any formal complaint.”

We scoured the Internet for some answers and came up with these ideas:

Antimatter
Anti matter is most simply, the opposite of matter. If you think of matter as being made up of electrons, neutrons and protons, anti matter has its own particles that have the opposite charge and magnetic moment (a property of magnetism.) You can read more technical details of anti matter in our past story, but here’s the important take-away: when matter and anti matter collide, they kill each other dead and produce gamma rays or other fundamental particles in the process. Phil Plait (author of the blog Bad Astronomy, now at Slate) says it’s indeed possible to blow up the Earth with it, but it would take a trillion tons. That’s not only complicated, but expensive. “Given that it currently costs hundreds of billions of dollars to make a single ounce of anti matter, you might have to work an extra job to cover the expense,” he wrote on Blastr.

Black hole
If a black hole were to pop up right next to Earth or inside the planet, this might be a way to shrink the planet down to nothing super-quick. We’re not sure how the Vogons did this, but hey, we’re talking science fiction here. It’s also unclear to us how bright this would look (remember, the Vogons had a light beam), but maybe the Vogons turned on the lights for dramatic effect. And here we should interject with some sobering reality from NASA, too: “Black holes do not go around in space eating stars, moons and planets,” the agency once wrote, adding that even if a black hole appeared where the Sun is today, Earth still wouldn’t be sucked over there. In fact, the gravitational force would be identical and the planets would continue their merry orbits.

A Death Star Credit: Lucasfilm Yes yes, we know, we’re mixing up our science fiction franchises. This was actually a laser-blasting, planet-destroying machine from Star Wars. But at risk of offending the Internet, a couple of legitimate points: There’s nothing to stop alien civilizations from sharing technology, or perhaps acquiring it, rather than spend the money to develop it themselves. In 2011, three researchers from the University of Leicester suggested that indeed a Death Star could destroy a planet, given an adequate power source. Check out the details in our past Universe Today story.

Do you have some other ideas of how the Vogons destroyed Earth?

IF WE DISCOVER ALIENS, WHAT’S OUR PROTOCOL FOR MAKING CONTACT?

RICHARD FRENCH, EX-AIR FORCE LT. COLONEL, ‘IT WAS A UFO AND . . . THERE WERE ALIENS ABOARD IT’

RICHARD FRENCH, EX-AIR FORCE LT. COLONEL, 'IT WAS A UFO AND . . . THERE WERE ALIENS ABOARD IT'